Here are some images I took of the original Albany NY City Hall Bell that now resides in Albany’s Lincoln Park.

On September 28th in 1883, @AlbanyCityHall‘s original bell was hoisted and hung inside the bell tower. This city hall building was a Greek revival and was built using white marble with its entry porch supported by four Doric columns. The roof had an illuminating gilded dome. The interior was simple, with little ornamentation, though a full-length statue of Alexander Hamilton stood proudly in the center of the upper hall. 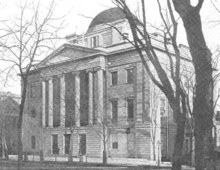 The building was destroyed by fire in the 1880’s but the bell survived, further lasting an additional 44 years in the replacement structure, completed in 1897.

City Hall’s Historic Bell was replaced by its carillon in 1927, which was a HUGE deal.

It contained sixty bells (though it could produce only 47 different notes since top notes have double bells) made by John Taylor & Co in England and financed by public donations (from upwards of 25,000 people), it cost $63,000 ($8.67 million in modern dollars) and was the first municipal carillon in the United States.

The carillon is still in use today and plays multiple concerts during the week while the original bell sits snuggly in the park listening on.

Leave your Reply, I'd love to hear what you think! Cancel reply

I'm Stephanie and I'm thrilled you are here!!!
Please click on the post images to see more photographs related to that topic, and my witty droll which accompanies them. :-)
I enjoy capturing both the honest, quiet moments amidst the chaos of daily life; as well as the energy and emotion that naturally unfolds at the most memorable events of the year... what ever they may be!
I am a mix of artistic portraiture, up close detailed macros, and photo journalism.
Our eyes capture thousands of beautiful pictures everyday and I'd love to show you what I see.
I am elated to have you along for the ride!

Please Save a Heart!